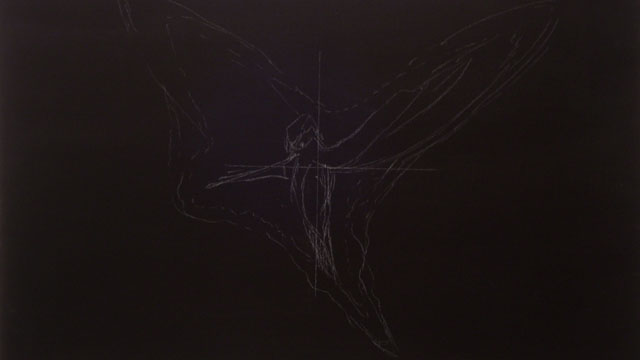 In this part of the blog I will explain in detail the decisions I take, the techniques, the colors and type of brushes I use to make the paintings from the very beginning so that if you decide to start painting on your own, you can use this as a guide. Painting astronomical objects in oil on canvas is not easy. This is the reason why most artists create digital images instead. Even though it is not an easy task and probably my paintings will not be as perfect as if I created digitized work, I decided to do this collection in oils because the brushstrokes show the imperfections, I might say, the humanity, of the person holding the brush and because I simply adore oils. Contrary to a print, an original oil painting is a unique work of art that has texture you can see and feel.

Stage 1. For this painting, I started out with a white cotton canvas which I primed four times with black gesso, a mixture consisting of a binder mixed with chalk, gypsum and black pigment. I coated the canvas with thin brushstrokes because I don’t want the structure of the canvas itself to disappear. After each coat, I sanded the canvas delicately with the finest sand paper, to get rid of unwanted brushstrokes. After the fourth coat, the canvas was let to dry completely overnight. To serve as a guide, I made a light pastel chalk drawing of the object.

Stage 2.
With a flat, rounded brush, I made a quick application of specific color mixtures in the positions where I want the highlights to be (see picture 2). The fast, spontaneous application of color gives the impression of effortlessness. I want my object to have an overall violet look. For the right shade of violet, I used a mixture of ultramarine blue (a cool blue) and Alizarin crimson (a cold red). This mixture gives a wide range of blue violet, violets and purple shades, depending on the blue to red ratios used.

Ultramarine blue (meaning: beyond the sea) is the most beautiful blue! Today, it is made artificially. However, in the past, ultramarine blue was extracted from lapis Luzuli, lazurite, a very expensive material that stems from Afghanistan. Ultramarine blue was used by the Egyptians over 6,000 years ago, and was later imported from Afghanistan to Europe. The pigment can be purified from lapis lazuli by first mixing it with wax and diluted in a lye bath until crystallization. Today, one can buy the pigment, which can be easily synthesized in a well-equipped laboratory as follows: Mix 2 parts of sulfur, S, with 1 part of dry carbonate soda,

. Place the mixture in a Hessian crucible, cover and heat. Gradually, sprinkle a mixture of silicate and aluminate soda,

. Calcinate for 1 hour and wash with water.

Stage 3.
At this stage, I continued blending the colors mixed above with the same flat, round brush. I also used viridian green, which is a green I love to use because of its versatility; viridian green is a transparent, cold green. For this step, I mixed it with cadmium yellow for hints of lime green and with phtalo blue for subtle turquoise highlights; when mixed with dark blue or ultramarine blue and alizarin crimson, viridian green gives a dark petrol green, hints of which can be seen in this intermediate step.

Artificially, the viridian pigment is made by mixing 10 g of boric acid,

, with 5 g of potassium dichromate,

, until the mixture is homogeneous. The mixture is then heated to 500 Celcius for 6 hours. Heating these two molecules induces the chemical synthesis of Chromium III oxide,

; this compound is green in color, but not as vibrant. The Chromium II oxide is let to cool at air temperature, and subsequently cold water is added. After the pigment is filtered and completely dried, one can mix it with cold pressed linseed oil.

Stage 4.
Still using my trusty flat, round brush, I continued blending my triple merger within itself and with the background. I only added extra paint to the areas that needed highlighting, namely, the star forming regions on the head, heart and body (light violet).

Making one’s pigment and creating one’s colors is a science and an art in itself. If making a pigment is too much of a hassle, a variety of pure pigments are available at art stores. To make the paint at home, I do the following: in a mortar and pestle, pour the pigment and add a small amount of cold pressed linseed oil. Grind the mixture with the pestle until the pigment and oil are homogeneous; continue adding adding oil and grinding for 15 minutes until the paste is consistently firm; if the paste is still liquid, add more pigment. If an opaque oil color is desired, add a small amount of Titanium white. It is preferable to store the paint in a tube, otherwise it will dry out. Clean the mortar and pestle with turpentine to avoid color contamination.

Stage 4. The final highlights were made by adding small mounts of paint to a fine, round-tipped brush. The foreground and background objects were painted individually using a mixture of quinacridone red and ultramarine blue as the base for the red objects, viridian green with cadmium yellow for the off white objects.

The painting was named after the Violet Tear Hummingbird.