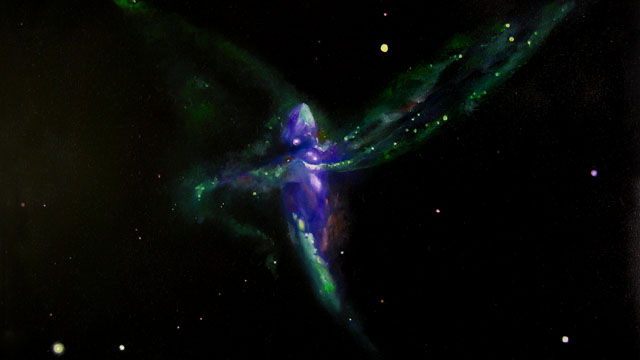 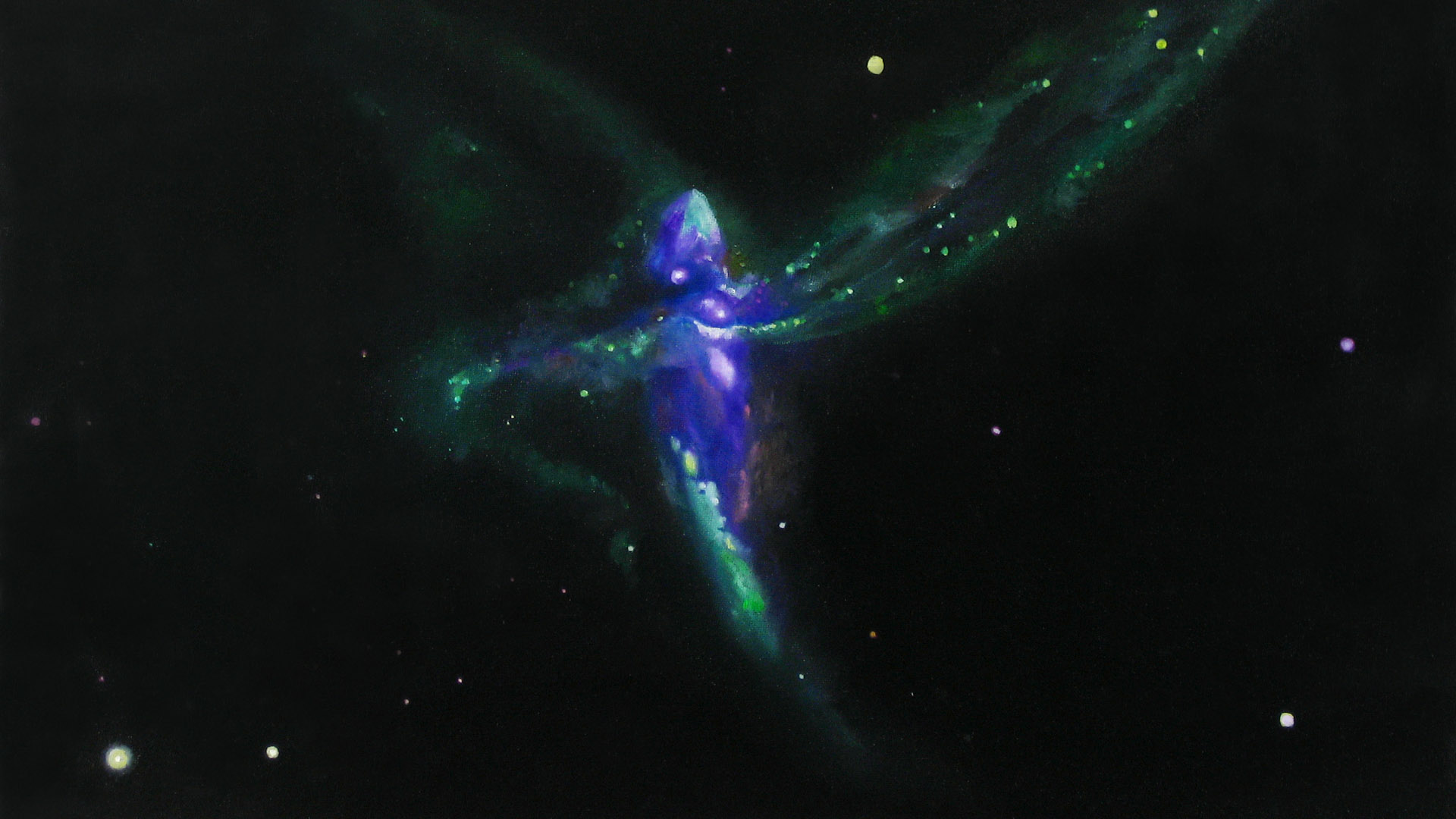 Diana P. Battefeld, Violet Tear, 2015 [Oil on Canvas] Göttingen. After an image published by Petri Väisänen et al, Mon. Not. R. Astron. Soc. 000 1-24 (2007). The Anatomy of a Bird was originally photographed using a dataset combination of the Advanced Camera for Surveys on board the Hubble Space Telescope (ACS/HST) and deep optical spectroscopy from the Southern African Large Telescope (SALT), adaptive optics near-infrared (NIR) imaging from the Very Large Telescope (VLT) and mid-infrared photometry and spectroscopy onboard Spitzer.

The path to getting acquainted with our universe has been a long, treacherous and arduous one. In the 17th Century, it was believed that all objects in the universe, which consisted of our own galaxy, were uniformly distributed, star-like, and of the same brightness as our sun. Finding their distances proved to be extremely difficult. If all the stars have the same brightness as the sun, the inverse square law could be used to estimate their distances by comparing the brightness of the sun to that of the distant stars; the root of the problem, however, is that it is difficult to compare the extreme brightness of the daylight sun to the relative dim stars at night. James Gregory (1638 – 1675) was the first to attempt to make a reasonable estimate to a distant star. He compared the amount of light coming from the sun reflected by Jupiter to that coming from Sirius. He assumed Jupiter to be a perfect reflector. By comparing the apparent luminosity of the planet to that of Sirius, he could estimate Sirius’ distance to be about 1.3 light years. At the time, this was an important discovery because it showed that these objects were located farther away than anticipated. However, since Sirius is 26 times brighter than our sun, it is actually about a factor of the square root of 26 further away. This technique was used subsequently for other celestial objects.

Whether the spiral nebulae of the 18th and 19th Century were located within our galaxy or beyond was a pressing question that remained open until the early part of the 20th Century. People knew that there were nebulous objects whose characteristics were different than those of stars; these nebulae were so far away that their true nature and distances could not be measured with the technology of the time. However, by 1802, Frederick William Herschel had made significant breakthroughs: he showed that binary systems orbit around a common center of mass due to their mutual gravitational attraction and that stars have a wide variety of different luminosities. Equally important, he showed that our galaxy had no edge.

The nature of these spiral nebulae, the size of the galaxy, and ultimately the size of the universe, was in part settled with what is known as the Shapely-Curtis Debate, also known as The Great Debate. At the meeting of the National Academy of Sciences on April 26th 1920, Harlow Shapely (1885 – 1972) and Heber D. Curtis (1872 – 1942) debated The Scale of the Universe. Shapely argued that our galaxy was the entire universe and that spiral nebulae, such as Andromeda (also known as M31), were simply part of our own galaxy. He reasoned that if Andromeda was not a member of our own galaxy, it would have to be 100 000 000 light years away, a distance that was unimaginable at the time. The opposing argument, that Andromeda and other spiral nebulae were separate galaxies, was contended by Heber D. Curtis (1872 – 1942). To back up his argument, Curtis showed that there were more novae within Andromeda than within our own galaxy. He reasoned that it did not make sense that there were more novae in a small region of space than in others; hence, Andromeda had to be a separate galaxy, and as a consequence, a member of a much larger universe. In the end, Curtis was right. However, the debate was not as straightforward: both Shapely’s and Curtis’ models had right and wrong aspects. In Shapeley’s model the sun was not at center of his larger galaxy-universe, whereas in Curtis’ the sun was near the center of a smaller galaxy. Today we know that in this respect Shapely was right; our solar system is about half the radius of the visible disk from the center of the Milky Way.

The final resolution came in the same year. Working with the largest telescope in the world, the Hooker Telescope, Edwin Hubble (1889-1953) identified Cepheid variable stars in Andromeda. Using the period-luminosity relation discovered by Henrietta Leavitt (1868 – 1921) and the spectral shifts of Vesto Silpher (1875 – 1969), Hubble measured the distances to nebulae and showed that they were far outside our own galaxy. The brightness of Cepheid variables oscillate and from the period one can deduce the absolute luminosity of these stars. A comparison to the observed brightness leads immediately to the object’s distance. Hubble showed that Andromeda is a galaxy like our own. His discovery was in accord with Curtis’ assertion that the Milky Way and the Spiral Nebulae are independent galaxies that make up a larger universe.

The Andromeda galaxy contains one trillion stars, whereas, the Milky Way encompass about one third of them. Both are predicted to merge in 4 billion years.

The above painting shows a merger of three far away galaxies that appear nebulous from Earth. Located at a distance of 650 million light years, or more than 260 times the distance to Andromeda, these galaxies, ESO 593-IG 008, or IRAS 19115-2124, were first thought to be an interacting pair of galaxies. Using adaptive optics that penetrated the surrounding dust, Petri Väisänen and collaborators were able to resolve details of an apparently barred spiral located at the heart of the bird and an irregular galaxy at the body; at the head is a third, smaller star-forming galaxy. This galaxy appears to be an irregular one (see the K-band image first from the left, below; at the center and right are the Hubble Space Telescope B and I images). The apparent bright knots on the head indicate the presence of HII regions, large areas of low density clouds of ionized Hydrogen gas were star formation takes place, and super star clusters (SSC), areas that contain a large number of young, massive stars. The head is believed to be composed of fragments of a previous galaxy or a conglomeration of star clusters formed out of materials from the interaction of the two major galaxies in the body of the bird. The tidal tails, the wings, span a distance of 100 000 light-years, about the size of our own galaxy. The upper part of the right wing is moving towards us, whereas the head has been observed to be redshifting (receding)

These galaxies belong to a family of luminous infrared galaxies that are about 10 times brighter than our galaxy. Luminous Infrared galaxies (LIRGs) provide a wealth of information about galaxy formation and events within galaxies. At high Infrared luminosities, it is possible to detect galaxy mergers that contain starbursts and active galactic nuclei (AGN). The Starbursts and AGN are thought to be the building blocks for stellar masses and large black holes and, in addition, may also be the material that contributes to enriching the intergalactic medium, the stuff between galaxies. Such merging processes are thought to transform their morphology; for example, a disk galaxy can transform into an elliptical galaxy.

To obtain the false color image, Vaisanen et al. combined the three infrared frequency bands below, BIK, such that each of them represents a visible color, red, blue and green. For the painting, I wanted the colors to be violet to represent the Violet Tear hummingbird, hence I shifted the color spectrum compared to the ESO image.