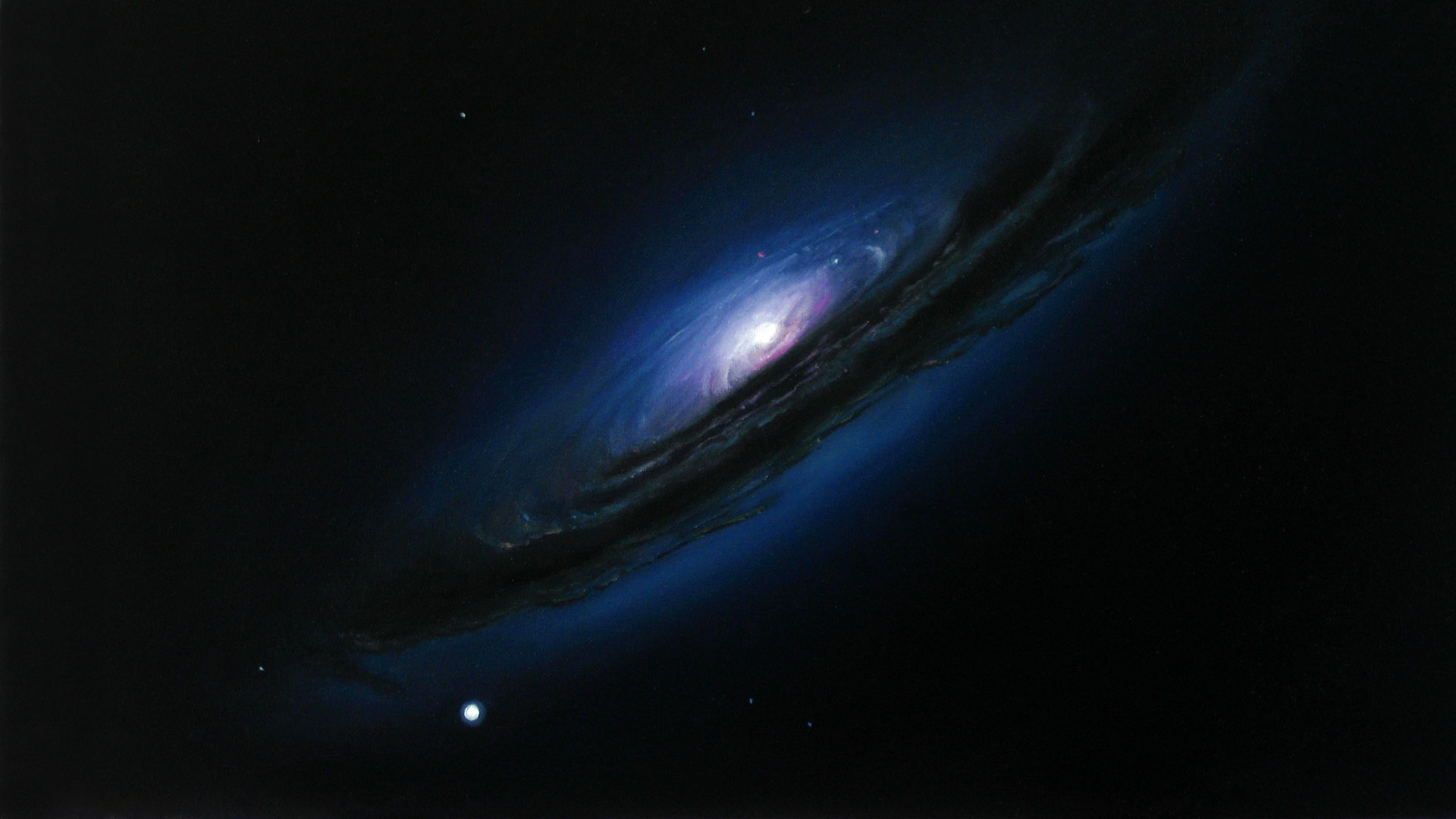 Diana P. Battefeld, Death of a Star, 2015 [Oil on Canvas] Göttingen. After an image taken by the High-Z Supernova Search Team, HST, NASA.

The blunders and successes of the past 300 years culminated in 1926 when Edwin Hubble, through his observations of Cepheid Variables in the Andromeda Nebula, established that the spiral nebulae were in fact not part of our own galaxy. The magnitude of this discovery cannot be overstated. For the first time in the history of humanity we knew that our galaxy was one of many in an unimaginably large universe. In his first paper Extragalactic Nebulae, published in 1926, Hubble classified galaxies into ellipticals, irregulars and spirals. In addition, he showed that galaxies are uniformly distributed in space by using their number counts. This small publication was solely responsible for the beginning of intergalactic research and discovery.

In 1929 Hubble made his second greatest contribution to science. In his 1929 paper A Relation between Distance and Radial Velocity among Extragalactic Nebulae, he showed, with limited amount of data, that nebulae are moving away from our Galaxy. The Hubble Law

is a relation between the velocity and distance to galaxies.

is the Hubble parameter with a value of 600 Km/s/Mpc,

is the velocity and

is the distance. Hubble’s law shows that galaxies are not only moving away from us, but the further away they are the faster they move.  Hubble was not the first to propose the idea of an expanding universe.  Belgian astronomer Georges Lamaître (1894 – 1966) proposed the expansion of the universe two years before Hubble published his work. In the paper Un universe homogène de masse constante et de rayon croissant, rendant compte de la vitesse radiale des nébuleuses extra-galactiques, Lamaître derived what was later to be known as the Hubble law and estimated a value for the Hubble parameter. Using Stromberg’s 42 extra-galactic nebulae, he furnished a relation between the apparent velocity recession of stars and the distance,

which is exactly what we know as the Hubble Law. However, Stromberg’s limited data did not allow Lamaître to provide a proof for a linear relationship, which Hubble did. When Lamaître showed his results to Einstein, he is purportedly to have said “Vos mathématiques sont superbes, mais votre physique abominable,” which means in English, “Your math is excellent, but your physics is horrendous”. Unfortunately, as is frequent in science, and we will see many examples in this blog, the discovery of the expansion of the universe is solely credited to the more outspoken, charismatic Hubble.

Together with the cosmological principle, which states that we are not located at a special place in the universe, Lamaître’s discovery and Hubble’s observations show that the entire universe is undergoing an expansion. By expansion we mean that new space is created between galaxies. For a simple, step by step guide on how to compute the Hubble parameter, age and expansion of the universe, see this introductory physics lab. This discovery shocked the world. For centuries the universe was thought to be static.

In the previous 300 hundred years, Newton’s idea that all motion takes place with respect to a system of absolute time and space prevailed. Ernst Mach (1838 – 1916) criticized this position by stating that motion can only be defined relative to other bodies. His ideas motivated Albert Einstein to develop a theory of gravitation that does not only respect special relativity but is invariant under general coordinate transformations. This theory is called General Relativity. In it, space and time are not separate, static entities, but form a dynamical space-time. The curvature of this space-time is determined by the content in it, such as matter and radiation, but also dark matter and dark energy.
The field equation of general relativity

relate the curvature of space-time, left hand side, to the energy momentum tensor, right hand side.

is an additive constant that can be added to the Einstein equations. However, there is an ambiguity: this cosmological constant can be seen as the constant energy density of the vacuum and it is not fixed by the structure of the theory,

The painting above shows Supernova 1994D, located on the lower left corner of a disk galaxy NGC 4526. It is in fact a type IA supernova which are all characterized by essentially the same intrinsic brightness. As evident in the painting, the explosion of a single star rivals the brightness of an entire galaxy for a brief amount of time. These standard candles can be used to measure the distance to far away galaxies that could not be determined by other means, such as the Cepheid Variables used by Hubble. The brightness-distance relation allows scientists to determine if the expansion rate of the universe is constant or dynamical. Current observations show that the expansion is in fact accelerating due to dark energy. Extrapolating to the past, the observation of the expansion rate is evidence that at an earlier time the universe was smaller than it is now. In fact, we can deduce the time at which the observable universe was compressed to a region smaller than a pin-head. This Big Bang happened about

Death of a Star - The Painting