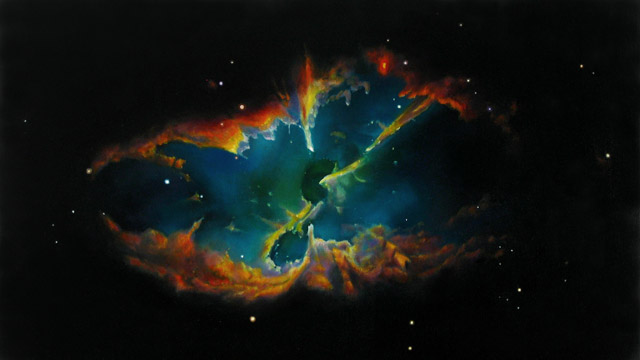 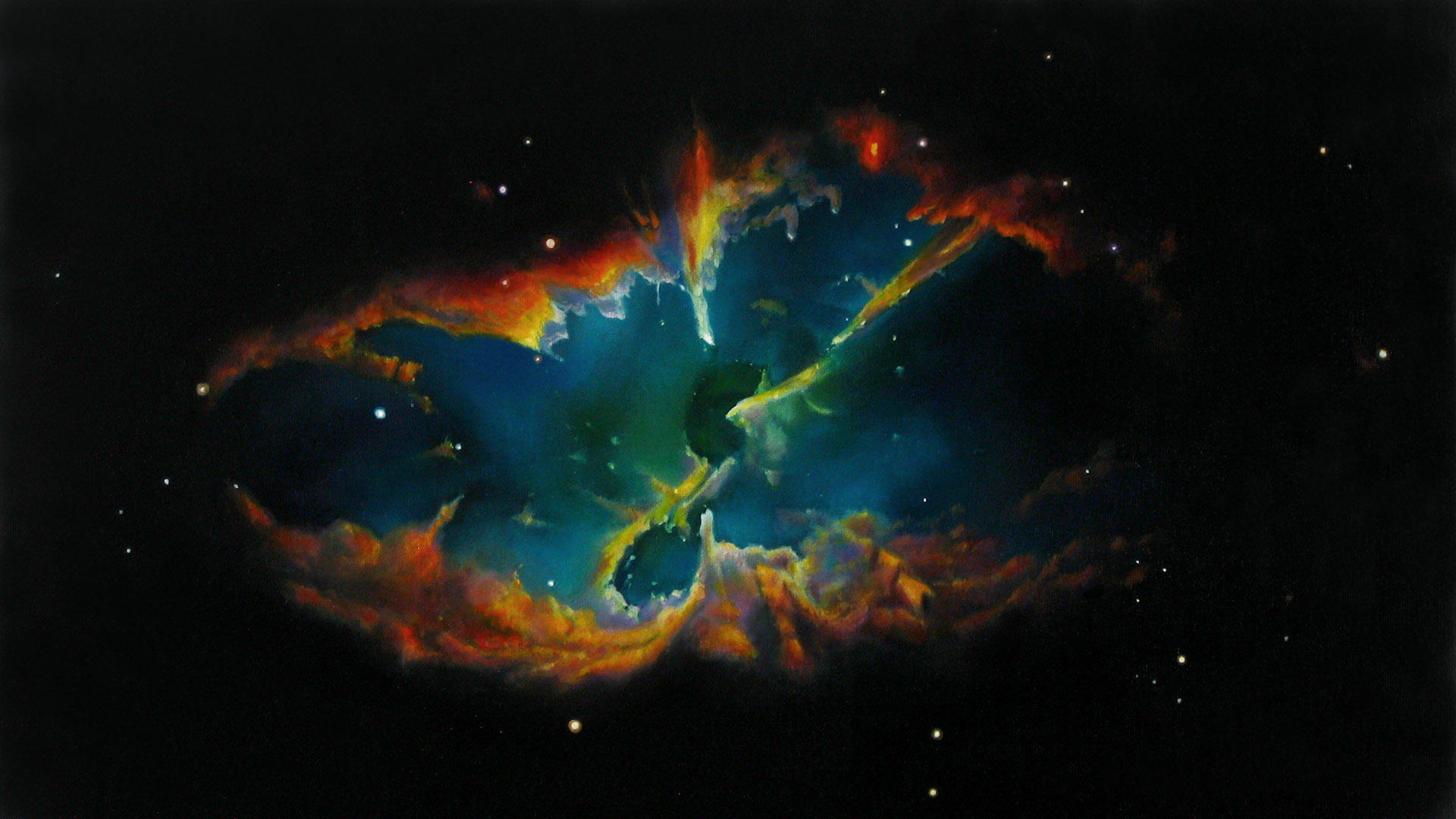 Diana Battefeld, Afterdeath, 2015 [Oil on Canvas]. After the planetary nebula NGC 2818 photographed by the the wide field planetary camera 2 HST.

The presence of the cosmological constant in the Einstein Equations was debated for many years. Einstein thought it “detracted from the formal beauty of the theory”; others thought of it as a constant to be determined by observations. The resolution to this dilemma came surreptitiously when Alksander Friedmann (1888-1925) wrote down static and dynamical solutions to Einstein’s field equations in 1922 and 1924 before it was realized that the universe was expanding. In his first paper, On the Curvature of Space, Friedmann found solutions for an expanding universe with closed spatial geometries. In his second paper, On the Differential Geometry of Curved Space, he wrote down expanding unbounded solutions with hyperbolic geometry (an infinite universe with constant negative curvature); in 1917, Willem de Sitter (1872 – 1934) pioneered the concept of the de Sitter Space and the de Sitter Universe, a matter-less universe with a positive cosmological constant, meaning, an empty, exponentially expanding universe. Besides spatial homogeneity and isotropy, the de Sitter universe is also time-translation invariant.
Friedman was aware of de Sitter’s work and he retained the assumption of homogeneity and isotropy; this assumption determines the metric uniquely up to the time-dependent scale factor

, which describes the overall dynamics, and the spatial curvature, such as open, closed or flat. The latter possibilities are denoted by the variable

, which takes the values

. This metric is called the Friedmann-Lamaître-Roberson-Walker metric.

To visualize the effect of the scale factor a(t), consider a far away galaxy. The distance to that galaxy,

, increases as the time

grows. In view of General Relativity, one can write this distance as

. The increase of this distance is due to the creation of space in between our galaxy and the far away galaxy, and not due to the velocity of the aforementioned galaxy. If we and this far-away galaxy were to inhabit de Sitter space, the scale factor would not only increase, but its rate of change would grow as well. This means that the expansion of the universe is accelerating. At some point, we will no longer be able to receive any signals from this far-away galaxy because it will cross the Hubble horizon.

In a homogeneous and isotropic universe, the Einstein equations simplify to two differential equations that determine the rate of change of the scale factor and its acceleration. These equations are called the Friedmann equations,

where a dot determines a derivative with respect to time. For example,

is the rate of change of the scale factor, that is the speed of expansion, and

is the acceleration of the expansion. If

is positive, the expansion speed grows, while a negative value indicates a decreasing expansion rate. Incidentally, recent observations show that our universe entered an accelerated expansion.

Friedman realized that General Relativity alone could not resolve the geometry and topology of the universe and that the value of a cosmological constant, if any, had to be determined by observations. However, Friedmann’s results remained unknown until Lamaître and Robertson independently discovered the Friedman equations in 1927 and 1928 respectively.

In the last post, we saw how Hubble and Lamaître pioneered extragalactic astronomy.  Hubble’s work included a morphological classification of galaxies, number counts, mass to luminosity ratios, the mass density of the universe in terms of galaxies and the bold statement that the universe is expanding. Galaxies allow us to characterize and to understand the properties of the entire Universe since they let us create a map of the visible universe.

There are two approaches to  galaxy formation: a top-down and a bottom-up one. The former is the so-called  adiabatic model, where the structure of the universe was produced by the fragmentation of large scale structure. The latter is called the isothermal model, and pertains to small structures clustering to form large ones. The formation of galaxies is not an easy subject, because they are complex many-body systems. A single galaxy is made up of billions of stars plus a huge amount of interstellar dust and gases, as well as dark matter. We will discuss this complex topic in the future.

Our galaxy, the Milky Way, is believed to contain about 200 billion stars. The vast majority of medium-sized stars, objects comparable in mass to our sun, do not go out with a bang like supernovae, but whimper, leaving behind planetary nebulae. When a main sequence star exhausts material to fuse, it increases in size, sheds its outer layers, and leaves behind a stellar remnant: a white dwarf surrounded by a planetary nebula. These objects are dim, invisible to the naked eye, and rare because they are short-lived compared to the total stellar life; only 3 000 specimens are known in our galaxy. More than

of planetary nebulae are either elliptical or bipolar; the magnetic field in central stars located in the center of nebulae may be responsible for their non-spherical symmetry.

The painting above depicts a planetary nebula named NGC 2818. It is located about 10 000 light years away in the constellation Pyxis, that is in our galactic neighborhood. The gaseous clouds are the remnants of a very hot central star that run out of fuel and collapsed. The colors of the original image indicate emissions from the nebula’s clouds, where red, green and blue designate nitrogen, hydrogen and oxygen respectively. As such, the image is again a false-color image, like almost all the HST’s depictions of nebulae. The vibrant colors often seen in science fiction movies, in computer games, and naturally in this painting are misleading.