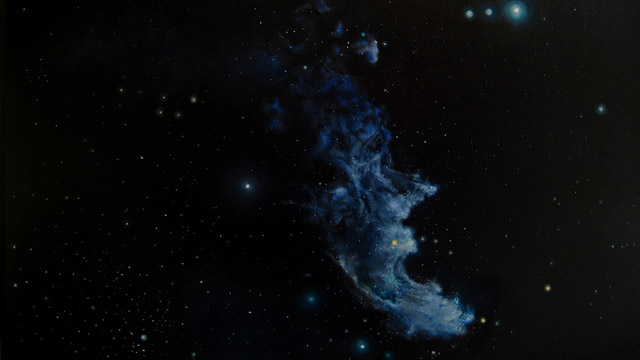 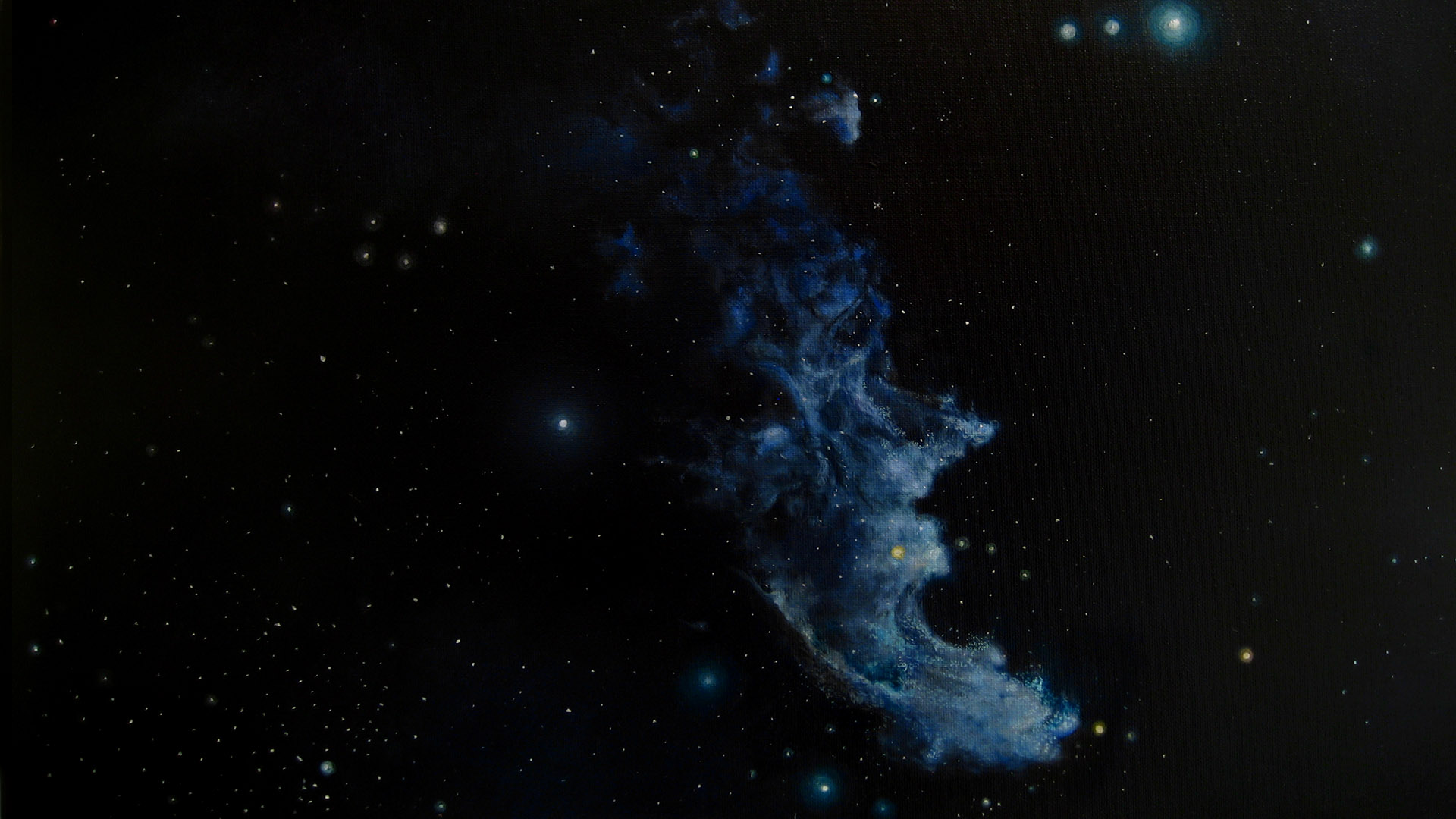 Diana Battefeld, A Witch is unveiled by Rigel , 2015 [Oil on Canvas]. After an image of NGC 1909 taken by NASA/STScI Digitized Sky Survey.

One of the major advances of the twentieth century in theoretical cosmology was made by Russian theoretical physicist and cosmologist George Gamow, (1904 – 1968). Lemaitre’s work reached its apotheosis when Gamow, a strong advocate of the hot big bang expanding theory of the universe, used the idea of a singular primordial vacuum. Gamow’s unique contribution was the notion of an expanding universe whose early beginnings had been extremely hot and radiation dominated, as opposed to matter dominated.

In 1925, British Astronomer Cecilia Payne (1900 – 1979) showed that the chemical composition of stars in terms of the relative abundances of hydrogen and helium appeared to be the same throughout the universe. Based on this information, Gamow tried to elucidate the creation of the chemical elements by primordial nucleosynthesis, the process of creating heavier chemical elements from lighter ones shortly after the big bang. However, Gamow’s collaborator, Ralph Alpher (1921 – 2007,) found a stumbling block to this hypothesis — there was no known way to synthesize heavier elements via primordial nucleosynthesis. He showed that at the extremely high temperatures of the early universe, Deuterium (a stable isotope of hydrogen,

comprised of one proton and one neutron that bind together via the nuclear force) would be ripped apart by the overwhelming number of high energy photons, light quanta. Thus, nothing heavier than Deuterium could be formed due to this Deuterium Bottle Neck. As the temperature of the universe dropped, however, the effect of the average energy of the photons decreased, and at about 1 second after the big bang, deuterium became stable and could be readily fused into Helium. However, shortly thereafter, temperatures were so low that no further fusion into heavier elements took place. The early universe thus contained primarily hydrogen (~ 75% by mass) and helium (~ 25% by mass) with only traces of heavier elements. This ratio is roughly consistent with the observed abundances of hydrogen and helium made by Cecilia Payne. The differences are due to the evolution of stars up until today. This work was extended by Fred Hoyle (1915 – 2001) to include the synthesis of chemical elements heavier than Helium by nuclear reactions in stars. In his first publication on nucleosynthesis, The synthesis of the elements from hydrogen, he showed that heavy elements could be generated and distributed throughout the universe during the violent collapse of dying stars. His second paper On nuclear reactions occurring in very hot stars: the synthesis of the elements from carbon to nickel, showed that the centers of stars evolve to acquire temperatures as high as billions of degrees, enabling fusion of heavier elements. However, since the creation of elements heavier than iron use up more energy than it releases, even heavier elements would have their origin in the aforementioned collapse of stars. Therefore, Iron is observationally more abundant than any other heavy element. Together with collaborators, Margaret Burbidge, Geoffrey Burbidge and William Fowler, he summarized the creation of elements in stars. This combination of processes is the accepted criterion for the nucleosynthesis of heavy elements. Supernovae are crucial for the distribution of heavy elements throughout the universe. In this sense, they are the crucible for the materials we are made up of.

Let us investigate supernovae in more detail: there are several types of supernovae, which are classified according to the type of light emitted. Of more interest are the physical processes that give rise to supernovae; the most common ones are core collapse supernova, which are essentially heavy stars that collapse under their own weight once thermal nuclear fusion comes to an end. The core becomes heavy and since pressure due to fusion weakens, it becomes unable to withstand its own gravitational force so that it collapses, releasing huge amounts of energy in the process. The debris and the heavy elements produced inside the supernova are blasted in the form of a shock wave into the interstellar space. In some cases, the collapse may result in a neutron star, a rapidly rotating dense object and others may develop into black holes. Since stars come in many sizes and shapes, core collapse supernovae also show a huge variety.

Of great use to cosmology, however, are type 1A supernovae, which have their origin in binary star systems, two stars orbiting around a common center of mass. A supernova can occur when one of the stars in the binary system, a carbon oxygen white dwarf, pulls matter from its companion star. A white dwarf is kept stable due to pressure generated by densely packed electrons. As it accretes more matter, the pressure can no longer counterbalance the gravitational pull once the mass approaches 1.44 times the mass of our sun, the Chandrasekhar limit. For a long time, the consensus was that the white dwarf collapses at this point, combining electrons and protons in the process. Once these neutrons are packed like sardines in a can, they oppose a further collapse, leading to a stable neutron star. An outward shock wave results, that is, a supernova explosion, that expels the outer regions of the progenitor star into the interstellar medium, enabling the fusion of heavy elements in the shock waves. However, the current view of many astronomers presupposes that the Chandrasekhar limit is never reached, but instead a runaway carbon fusion process is instigated, which also leads to a supernova explosion. Irregardless of these details, these supernovae type 1A have essentially the same brightness since they have all a common history. This makes supernovae type 1A excellent standard candles to map the universe.

The object on the painting above is NGC 1909, also known as the witch head nebula. This nebula is believed to be an age-old supernova remnant. It is a member of our own galaxy, about 900 light years away from us. The gas clouds owe its auroral appearance to its proximity to Rigel, the seventh brightest star in the sky, in Orion. Rigel is located to the right of the witch’s head (not depicted). As the supershell expanded, the interstellar space was enriched with newly formed chemical elements. Star formation regions within this nebula can be detected via radio observations, which show the presence of Carbon Monoxide emissions. Thus, this supernovae remnant is a crucible for star formation.

The Witch -- The Painting