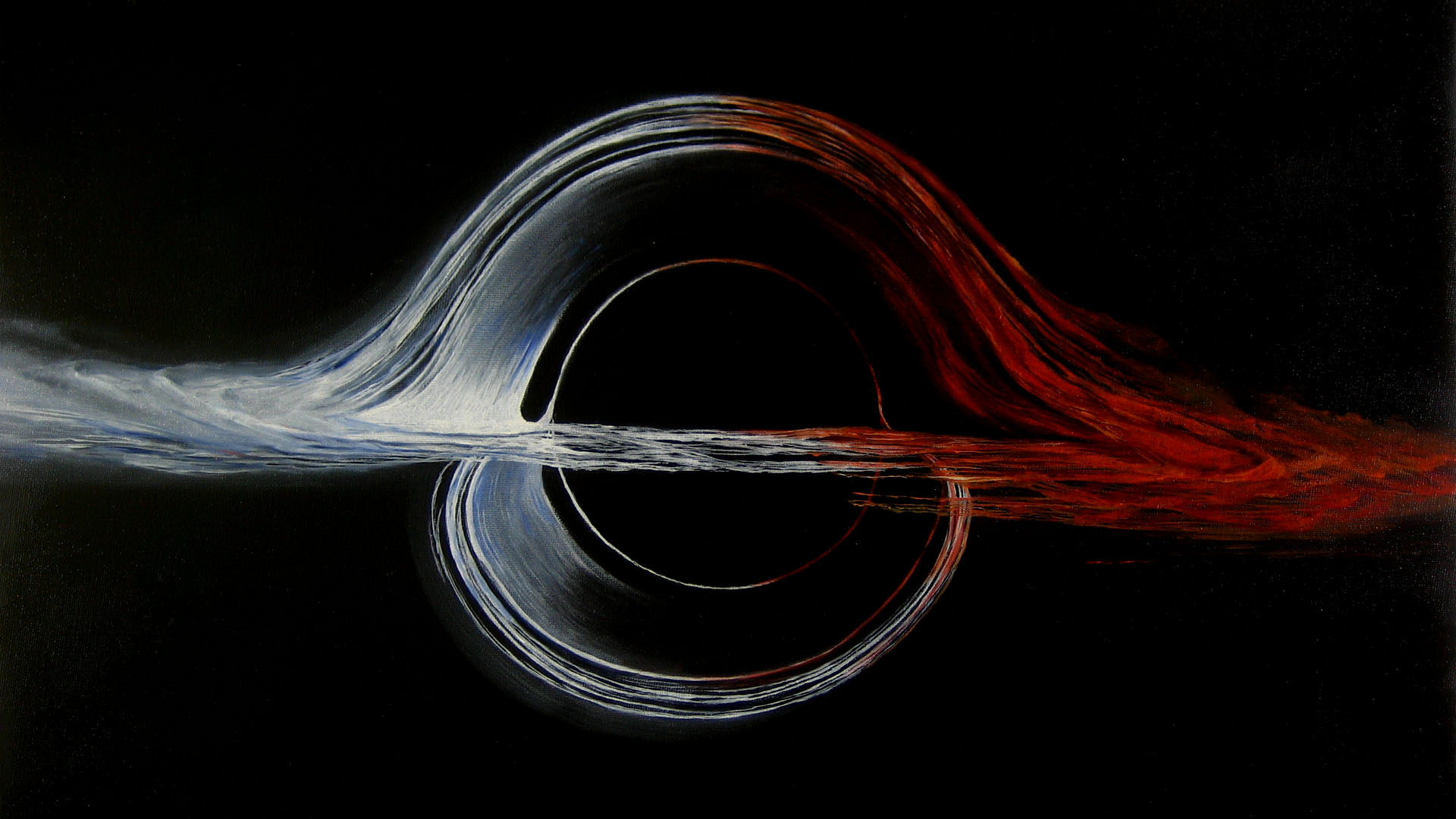 A black hole is a region in spacetime that is so dense that nothing can escape its gravitational pull, not even light. The gravitational attraction is so large that anything that comes too close to a black hole will be pulled towards it and be inevitably destroyed. Since even light can’t escape, black holes are truly black. This means that they do not emit any radiation, with the exception of a faint glow due to a quantum mechanical effect computed by Hawking. Hence, they cannot be detected directly through our instruments.

If black holes are so black and undetectable, how do we know that they exist? The hallmark of black holes is that they exhibit strong gravitational fields that influence matter and spacetime around them. Physicists can measure how light is bent by the graviational pull, or more precisely the curvature of spacetime. In a way a black hole acts as a lens by which the appearance of objects behind it are distorted. This effect of gravitational lensing is one way of detecting a black hole.

Alternately, one can measure the effect of a black hole on the movement of matter in its vicinity, such as planets or stars. If an object, say for instance, a planet strays near a black hole, it will fall towards it. The resulting tidal forces are so strong that celestial objects are shred to pieces. As debris from the planet trickles towards the black hole, it usually forms an accretion disk. Twirling towards the abyss, debris moves faster and faster, collides with each other, becoming hotter and emitting light and X-rays. Scientists in satellite observatories can “see” these X-rays and deduce the presence of a black hole in that location.

What is the origin of black holes? Some of them are born when stars die. Let’s look at a simple example: our Sun. Our sun is a star. It is powered by nuclear reactions, but as with all stars, it will run out of fuel eventually, in a few billion years; it will become a red giant, a dying star in its last stages of evolution that is many times larger its current size, emanating a deep red amber glow. However, if our Sun were more massive, that is, if it were about 20 times more massive, it would have a different fate: when it runs out of fuel, its core would collapse due to gravity as thermonuclear reactions shut down. In this violent process, shock waves would fling debris from the outer layers into space in all directions. This is one type of a supernova. The residual core would collapse further and further leading to a singularity. Mathematically, a singularity is a point in spacetime of infinite density. Its gravitational pull distorts spacetime strongly, the more so, the closer you are to the singularity. The resulting spacetime is usually referred to as a black hole.

The most salient characteristic of a black hole is that once you get too close, you may never leave. This point of no return is referred to as the event horizon, a surface around the singularity that even light can only cross once. Thus, an event horizon is a boundary in spacetime beyond which events cannot affect an outside observer. A non-rotating black hole, or Schwarzschild black hole, has just this one horizon, whereas a rotating one, or a Kerr black hole, is surrounded by two. Black holes are usually rotating, just like the stars that gave them birth. Approaching a rotating black hole, one is first forced to join the rotation before passing the point of no return.

Besides the mass and the strength of rotation, a black hole can also posses charge. However, since pretty much any large object is electrically neutral in our universe, naturally occurring black holes don’t carry any sizable net charge. These three quantities completely describe a black hole and once you know them, you know everything there is to know about them. This is known as the no-hair theorem, which simply states that black hole have not other discerning features.

Black holes appear in many different sizes in our Universe and not all form after a stellar collapse. Primordial black holes are the smallest ones. They could have been created during the violent birth of our Universe during a heating phase after a rapid expansion of spacetime (inflation) or subsequent phase transitions. Since they are so small they evaporate quickly due to the emission of Hawking radiation. Stellar black holes are more massive and common in galaxies. Supermassive black holes are a million times more massive than our sun, located in the centers of galaxies, like the supermassive black hole, Sgr A*, at the center of our own Milky Way Galaxy. Their origin is not completely understood, particularly how they can accumulate so much mass in the limited lifetime of our Universe (about 13.82 billion years according to the Planck satellite mission).

The painting above is that of a black hole visualized by James et.al [arXiv:1502.03808] for the movie Interstellar, and is the first semi-realistic depiction of a Kerr black hole. It includes several effects that are commonly omitted: gravitational lensing, gravitational and Doppler shift of the colors and intensity modulation due to Liouville’s theorem.

Contrary to how black holes are depicted in movies, including Interstellar, where they used a moderately realistic black hole with a slow spin, they would never look truly symmetric and evenly illuminated from up close; due to the bending of light-rays by the Kerr blackhole, you would see the accretion disc that is physically behind it: it appears to bend upwards, with several mirror images of itself all around the black hole. Thus, on one side of the black hole it appears to collapse into a flat, vertical border and a series of accretion disks that emerge from this edge.

Why is the black hole blue on one side blue and red on the other? The accretion disks around black holes are immensely hot. Light radiating away from the disk has the same color everywhere, but the disk is moving towards us on the left side while moving away from us on the right one. Much like the pitch of a police siren is higher when it approaches you and deeper when it moves away, the frequency of light, that is the color, is shifted higher (bluer) on the left and lower (redder) on the right. This is the Doppler effect of light. An additional similar effect due to gravity called gravitational redshift is present as well.

Lastly, the higher the frequency of light is, that is the bluer the color, the brighter it shines, a law named after the French mathematician Joseph Liouville. This makes the right side of the accretion disk darker and hardly visible, while the blueshifted left side is blindingly bright.

The disc of the depicted blackhole in the Movie Interstellar is actually uncharacteristically thin and relatively cold, only about 4500 K (~ 4226 Celsius), to prevent our intrepid astronauts from being toasted by x-rays. The rotational velocity of the disk is also uncharacteristically slow with a speed of roughly 0.55 times the speed of light. Thus, a realistic disk would be much brighter and blue-shifted on the left and darker as well as red-shifted on the right. In the end, both the color and brightness shifts were unfortunately omitted in the movie.

For the painting, I decided to increase the color saturation for aesthetic reasons.