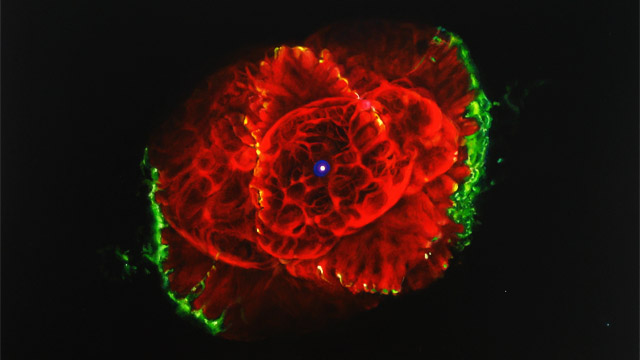 Diana P. Battefeld, Explosion, 2015 [Oil on Canvas]. After an image of NGC 6543, also known as the Cat Eye Nebula. The original image is a composite of optical images from the HST and X-ray data from the Chandra X-ray Observatory.

The Big Bang model of the Universe started to gain popularity in the late 1950’s and 1960’s. In 1961, the rivaling cosmological models, the steady state and evolutionary cosmological models (then known as Friedmann-Lemaitre cosmology) were discussed at the Symposium on Problems of Extra-galactic Research at the University of California, Santa Barbara. The former had the problem of requiring continuous creation of matter and was thus, at odds with known existing laws of physics. Opposite to the dynamical models, they were not the solutions to the Einstein Equations. Nevertheless, they were appealing to some people because they avoided an initial singularity. The evolutionary effects on the distribution of faint radio source counts carried out by Ryle et al. did not settle this controversy, but his interpretation was favored over that of steady state models. In addition, the question regarding the creation of elements during the early stages of the universe was focused to explain the abundances of hydrogen and helium abundances. Helium accounts for about

by mass of the visible matter — a value that exceeded the amount predicted by stellar nucleosynthesis. In the early 1950’s, it was believed that Helium originated by hydrogen burning in stars. However, just a decade later, in The mystery of the cosmic Helium Abundance, Hoyle et al. computed the expected Helium abundances by primordial nucleosynthesis. One way the ratio of

was measured consisted of observing planetary nebulae, such as in Planetary Nebulae in the Globular Cluster M15 by O’dell et al., who found that the

ratio is indeed much higher than predicted by stellar evolution alone.

The painting above is NGC 6543, also known as the Cat Eye Nebula, located within our own galaxy, three thousand light-years away. The complexity of the nebula’s morphology may indicate that the central star could be a binary star system. Planetary nebulae arise due to a dying star in its latest stage of stellar evolution. In nebulae such as this one, the stellar ejecta is propelled in all directions and may have been enriched by He during the course of stellar evolution.

Alpher and Herman’s predictions of primordial nucleosynthesis in the 1940’s , although forgotten for decades, were rediscovered in time in the 1960’s by Robert Dicke and Jakov Zel’dovich. Primordial nucleosynthesis in conjunction with the cool residual background radiation discovered accidentally by Arno Penzias and Robert Wilson in 1965, put the final nail on the coffin of the steady state model of the universe. In 1965, Dicke et al. provided a concise account of a dynamical universe, which was further developed by Peebles as the standard model of cosmology.

In 1967, a detailed description of the synthesis of elements in the early stages of a homogeneous and isotropic expanding universe was provided by Wagoner et al. in The synthesis of Elements at very High Temperatures. Their concluding remark was that if the CMBR is the result of primeval photons, then only Deuterium, Helium 3, Helium 4 and Lithium 7 could be produced. The core concepts of primordial nucleosynthesis are still valid.