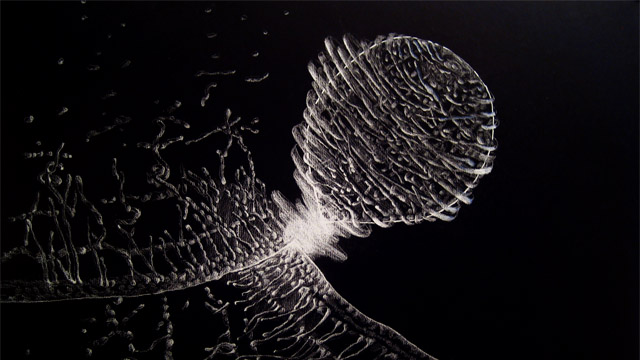 Diana P. Battefeld, The Effects of a Rotating Cosmic String Loop on the Surrounding Plasma, 2015 [soft chalk on paper]. After the concepts published by A. Anthonisen et al and D. Battefeld et al.

A rotating cosmic string loop has detached from its parent string. In the picture, the left part of the string moves downward, while the right side moves to the right; the loop has undergone a few rotations. The whole process is assumed to take place in the early universe so that strings move through a hot plasma. In such an environment, a cosmic string will create vortices in its wake, just as a stick moving through water. I have depicted equal density surfaces of the plasma to highlight the effect of the string on its environment. These are represented by the tubular structures shown in the picture.

A cosmic string does not radiate by itself. However, whenever a cusp (apex or corner structure) is present on a string, it radiates away energy predominantly in the form of gravitational waves. Since a loop just got detached from the string due to past self-intersecting, both the loop and the remaining string have a cusp, which are the source of the depicted bright region in the center of the picture.

Cosmic strings have not been observed yet, but they are likely to arise in the early universe due to phase transitions; they are topological defects that stretch throughout the universe. Another possible origin traces back to fundamental strings, i.e. the strings in string theory.

Cosmic strings could have several observational effects: since they perturb their environment as depicted above, this could lead to an additional source of density perturbations in the early universe. However, the statistical properties of such fluctuations are inconsistent with the fluctuations in the Cosmic Microwave Background Radiation (CMBR). This puts an upper bound on their mass per unit length and thus, their overall relevance for the energy budget of the universe. Individual strings also lead to gravitational lensing. The effect here is different from the one of a black hole, which leads to strong distortions of the lensed image. A cosmic string simply causes an exact duplicate image of an object that is behind it, but close to the line of sight. So far none of these kinds of lensing effects have been observed.