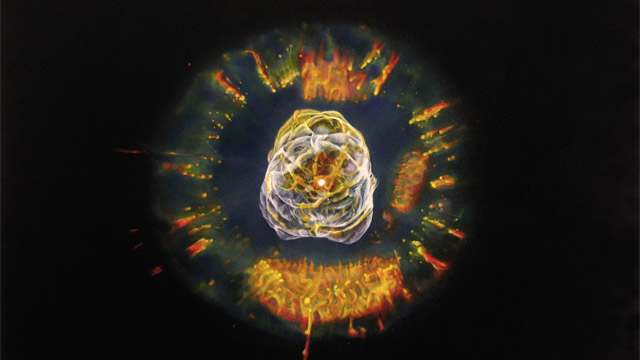 NGC 2392 was originally discovered by William Herschel in 1787 and was captured by the Hubble Space Telescope Wide Field and Planetary Camera 2 in 2000. It is located within our galaxy 5 000 light years away from Earth, in the constellation of Gemini; it is even visible with the aid of a small telescope.

This nebula started its own evolution when a dying star began to blow material into its surrounding space, 10 000 years ago. The bubble in the center is made up of radiation blown into space by the central star, the white dot. This is a false color image: red represents Nitrogen, green represents Hydrogen, blue means Oxygen and violet shows Helium.

The Wide Field Planetary Camera 2 is made up of four cameras, three wide field cameras and a planetary one. The three wide field cameras allow the telescope to produce panoramic images with the sensitivity necessary to capture distant, extremely faint objects. The planetary camera, however, has a higher resolution, but with a smaller field of view. All cameras have filters that allow a sensitivity to a range of light wavelengths from ultraviolet to the near infrared.

The WFPC2 is a clone of an earlier version WF/PC that was active for 17 years. It was replaced because the primary mirror was found to be faulty. The newer version was built by the Jet Propulsion Laboratory, JPL, and installed on the Hubble Space Telescope, HST, by astronauts on the 1993 space shuttle mission. Its advantage is that it has a robust charge coupled device detectors (CCDs) to avoid degradation from ultraviolet light.

The electronic circuits, CCDs are made of light-sensitive picture elements, pixels. Each of the four CCDs is made up of about 600 000 pixels. The CCDs are extremely sensitive to faint light, which is gathered by each pixel, and in turn converted into a number; these numbers, about 2 000 000, are then translated into images by ground-based computers. Modern hand-held digital cameras also use CCDs, which developed tremendously over the last 20 years.

In 2009 the WFC2 was removed and replaced by the Wide Field Camera 3. This camera was developed jointly by the Hubble program at Goddard Space Flight Center, the Space Telescope Science Institute, and Ball Aerospace & Technologies Corporation. In addition to near infrared and ultraviolet, this camera’s vision includes visible light. With a higher resolution, it is able to distinguish details that were not possible with the previous version. The addition of the ultraviolet-visible channel allows the detailed study of nearby galaxies and bursts of star formation. The near-infrared channel renders the investigation of light emanating from distant galaxies as it journeys through our expanding universe in the form of infrared light, providing a window into the younger universe and its evolutionary history.

A Rotating Cosmic String Loop Detaches from its Parent String