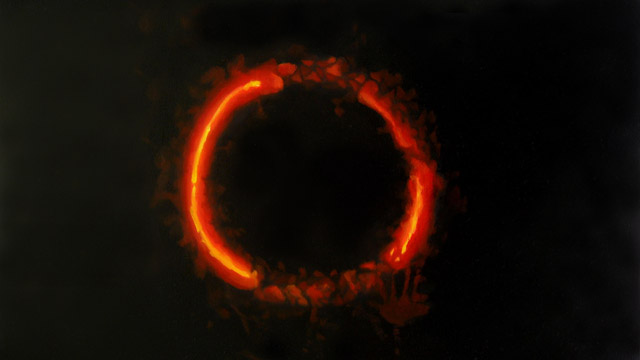 The path light takes is influenced by matter, similar to the orbits of planets around the sun. If light passes a heavy object, its path is bent according to the curvature of spacetime caused by the heavy object. This effect of gravitational lensing was one of the first predictions of general relativity that were measured by Arthur Eddington. He observed the bending of light from stars caused by the sun during a solar eclipse. Since the amount of bending differs from the the one predicted based on Newtonian gravity, this experiment convinced physicists that spacetime is indeed a dynamical quantity.

If a light emitting object is directly behind such a heavy lens, its image is smeared around the lens in a symmetric manner. This effect is named Einstein Ring. Naturally, such perfect alignment of a spherically symmetric lens behind and a light source behind it is extremely rare. Gravitational lenses also amplify the brightness of the lensed object. The advent of high precision, full sky surveys measuring billions of objects, renders such rare events observable.

The depicted object, is the Einstein ring caused by such a coincidental alignment. The light source is a galaxy (SPD. 81) nearly 12 billion light years away from us. It is one of the furthest objects ever observed by humans and offers a glimpse into the early universe where galaxies just formed. The lens is a galaxy that is located much closer to us (not depicted). Hence, this chance alignment acts as a time machine, making an object visible to us that would be to dim to see otherwise.

View of Our Galaxy After Horizon Crossing a Schwarzschild Black Hole