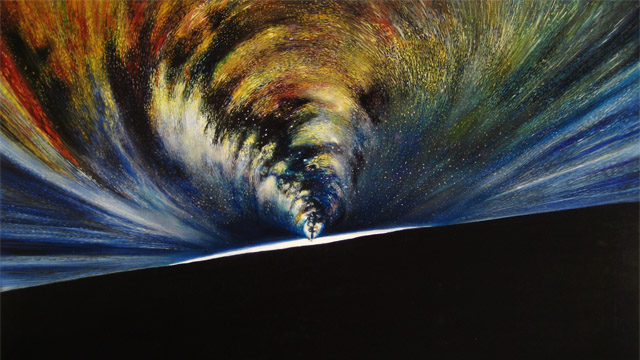 Diana P. Battefeld, Horizon Crossed, 2015 [Oil on Canvas]. After a private correspondence with A. Hamilton, a world’s expert on black hole simulations.

A common view of what an observer would see if she crossed the horizon of a Schwarzschild black hole and lowers herself towards a singularity is the following: as she approaches a singularity, the field of view above shrinks more and more, such that the darkness around appears to engulf her. Light in the visible patch, right above, would be intensively blueshifted. An implicit assumption necessary for such an appearance is that the observer tries as hard as she can to counteract the gravitational pull. For instance, by firing the boosters of a spaceship. Since any such attempts are futile anyhow, the observer might instead just go with the flow and fall freely into the black hole, that is, to follow a geodesic.

If one does the latter, the view is much more beautiful to behold. Light above oneself is redshifted, while light near the equatorial plane is blueshifted. This effect is due to tidal forces of the black hole, which are stronger the closer one is to the singularity. In the picture above, the observer crossed the horizon long ago and is looking around to see our galaxy. Besides the shifting of colors, tidal forces also distort the appearance of the galaxy. A curious effect that is also depicted is that to a free-falling observer, the black region still appears to be in front. This remains the case, even though the actual horizon is long-crossed. Only for an observer that is far away does the location of the horizon approximately coincide with the black region of the black hole.

To observe the color shift and distortions as strongly as depicted above, one would have to be close to the singularity, see Prof. Hamilton’s webpage for details on the ray tracing techniques used to generate the view of a free falling observer. Since the tidal forces are tremendous, any living observer would actually be stretched and ripped apart. Nevertheless, his or her last view would be quiet striking.

A view from a rotating black hole after horizon crossing onto an accretion disk is more complicated due to frame dragging effects and a more complicated metric. This view has not yet been calculated.