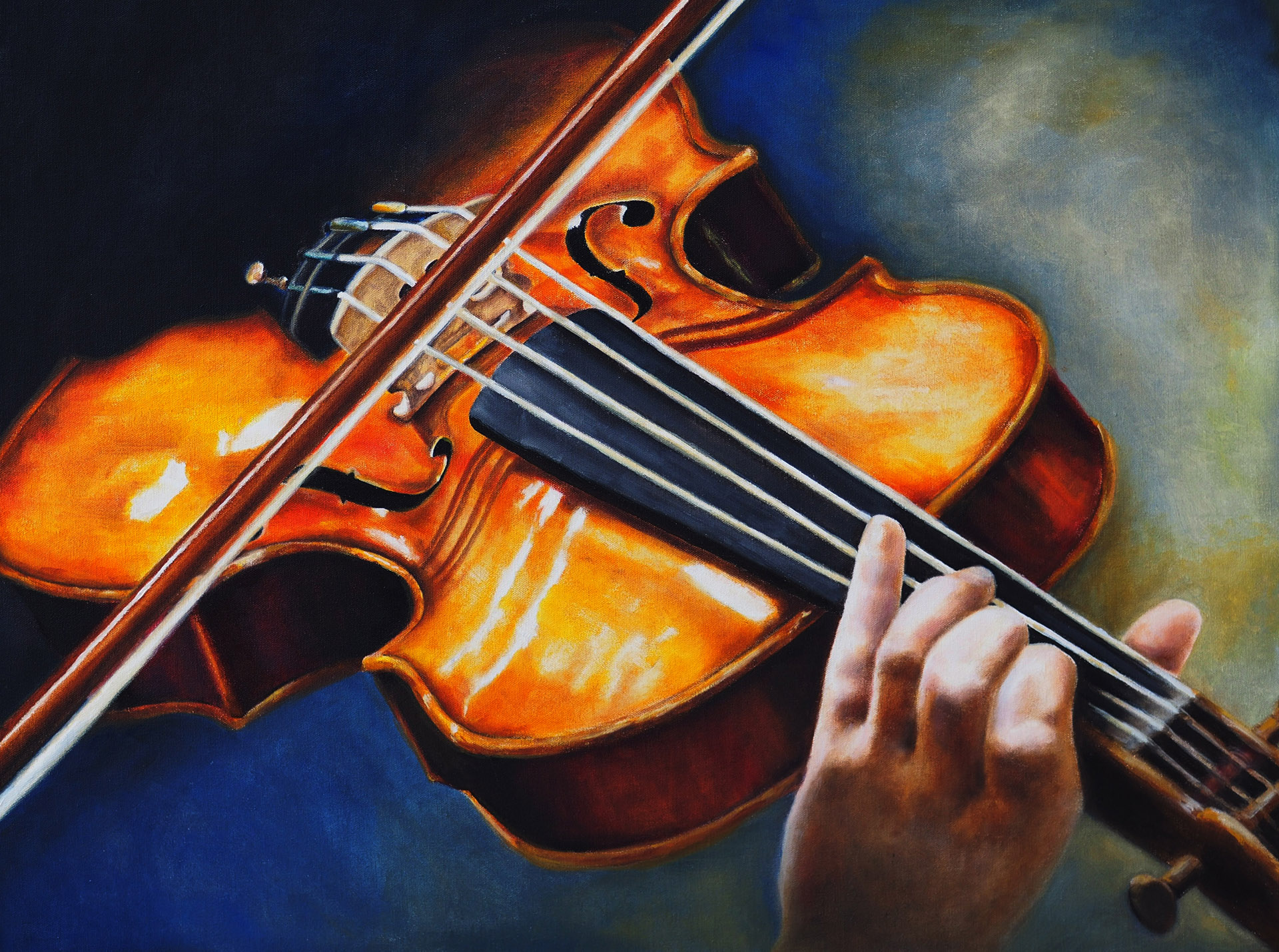 In playing the violin, it may be instructive to know what is going physically when the fingers are pressed upon the fingerboard and the bow slides on the string to carry the right kind of sound.  From a purely physical point of view, when a string vibrates it produces different frequencies of vibration; The string alone doesn’t produce much sound because its surface area is very small, and thus, it has minimum contact with the surrounding molecules in the air. The bridge and body of the violin are specifically designed to carry the vibrational energy produced by the string into the air.  In other words, the body of the violin acts as an amplifier.  If you pay careful attention, when you pluck the thickest string on your instrument, the G string on a violin, or a C string on the cello, you can feel and see it vibrate. As the string moves outward from the fingerboard, it compresses the air around it, which in turn, raises its pressure ; that is, the molecules vibrate with the same frequency as the vibrating string. The air flow continues to move outwards from its source, compressing  and refracting  the next layer of air and so on and so forth. As a result, the air disturbance spreads as a traveling sound wave until it reaches your ears.  During compression, or areas with high pressure  the molecules are tightly compressed, whereas during refraction,  or low pressure regions, the molecules spread apart.

Let’s look at the pitch. The pitch of a vibrating string depends on the characteristics of the string in question: its thickness, tension, length, and mode of vibration. The thicker the string, the slower it vibrates. In a violin, the G string is the thickest and the E string the  thinnest. Adjusting the pegs, changes the tension; the tighter the string is, the higher the pitch produced. The length of the string also influences its vibration: you can shorten the string by holding it down against the fingerboard. For example the pitch increases when as you go further up the scale on the A string with your fingers, B, C, D, E.

One can write very simple equations to determine  the string vibrations. We use the length of the string L, which varies according to finger position, linear density μ, which depends on the mass, m, of the string, its length, L, and the tension, τ, which as we discussed above, can be changed with the pegs.

The linear density is then written as,

Disturbing the string sets in motion a transverse wave.  Transverse waves travel back and forth along the string as it gets reflected by the nodes, where the string is attached (at this point, the value is zero).  To obtain a note, however, a large amplitude standing wave is necessary. This only occur for a set of discrete, natural or resonance, frequencies.  The frequency of string vibration ƒ,  depends on the wavelength λ, and the speed of propagation ν, as follows,

where the fundamental or first mode has a frequency of

and so on and so forth.

Furthermore, the speed of the wave propagation along the string depends on the string tension τ, and its linear density μ,

Playing the nth harmonic, results in the frequency